What is Iliotibial Band Syndrome?

The iliotibial band is broad band made of muscle fibers that starts at the iliac crest in the pelvis and will run through the side or the exterior part of the leg until it connects into the shinbone known as tibia. The iliac crest is the boundary of the most apparent bone found in the pelvis. The gluteal muscle or the buttocks and the muscles of the hip joint connect to it and the IT band works to organize muscle activity and steady the knee while running.

The iliotibial band syndrome is characterized by the pain brought about by the swelling of the band as it passes through the lateral condyle found in the femur. As the knee bends, the fibers shift transversely along the condyle and are placed at the back of it. A bursa also known as a sac in this part lets the iliotibial band to move smoothly above the last part of the femur.

Once the band became inflamed, friction can happen while walking or running leading to knee pain brought about by the swelling on the side part of the knee joint.

If untreated, more swelling and scarring may happen inside the bursa, leading to a constant pain with reduced work.

Pain in the knee is the chief symptom brought about by swelling as the iliotibial band glides transversely along the femoral condyle on the exterior, or side part of the knee. The pain is most painful while walking or running and may extend from the knee to the leg and towards the hip. Pain can also be sensed while the knees are bent, particularly climbing up or down the stairs.

Physical assessment may show overall pain and swelling above the area of the iliotibial band found at the knee joint. Particular tender points may be noticed above the side part of the femoral condyle where the bursa is found. The assessment may reveal few vulnerability or disproportion of the quadriceps muscles and the hamstring muscles found in the rear of the thigh that bends the knee.

The iliotibial band might as well be rigid. Its elasticity can be verified by the doctor as the client performed different stretches. The Thomas and Ober tests are the two maneuvers that may aid in examining if the tensor fascia latae, the muscles of the buttocks and the iliotibial band is flexible.

The diagnosis of any kind of injury should involve questions regarding the patient’s overall health status, past injuries and present injuries. The purpose of these questions is to know which part might be the reason for the pain and what kind of management is suitable.


The physical therapist will perform a physical examination to assess what parts are the causes of the pain and what may have helped for having the injury.

This test is indicated to test the tightness of the iliotibial band. The client will be placed in a lateral position, and the leg will be examined above. The physical therapist will steady the pelvis with the use of his or her hand, while they pull out the hip with their other hand. It will permit the hip to go down in the direction of the table known as abduction. The result will be positive if the leg shifts down below 10 degrees horizontally. 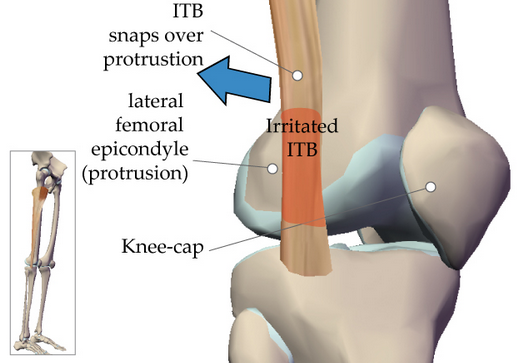 There are two types of stretches, self-stretching and stretching using an outside applied force:

The first that we will discuss is the self-stretching:

b) Stretching using an outside applied force:

First the initial position should be lateral position with the extended leg placed above. Then, the client will be placed lying on the unaffected side and the hip and knee of the leg below will be bent toward the chest and keep firmly in this kind of place. The hip of the upper leg is bent and abducted than stretched with the knee bent. The physical therapist will stand at the back of the client putting one hand on the client’s hip to keep it steady and the other hand on the extended knee while putting a downward pressure.

First the initial position should be on the side lying position of the affected side in the bottom. Then, the client is placed side-lying and the hip and knee of the upper leg are bent. The hip of the lower leg to be extended and the knee is somewhat bent. The physical therapist will stand at the back of the client putting one hand on the client’s pelvis to make it steady and the other hand is put below the affected knee. The physical therapist brings it upward on the lower extended leg and more hip stretching may be needed for the tension of the iliotibial band.

These are just examples of the rehabilitation for this condition. This is for educational purposes only. Seeking medical advice and help is still necessary prior to performing any kind of rehabilitation.

The purposes of rehabilitation are the following:

In decreasing pain and swelling it may continue from two days to two weeks based on how severe the injury is and how good the treatment is.

In extending the iliotibial bane the following should be done:

In strengthening the following should be done:

In slow recovery to fitness the following should be done:

In prevention the following should be done:

One thought on “Iliotibial Band Syndrome”