The condition is not common and most of the individuals who have it may not experience any symptoms. However, when a certain pressure is exerted on several structures in the neck and head by these ossified structures, a wide variety of symptoms may occur. This disease usually appears with aging.

The ossification of the stylohyoid ligaments and styloid process can contribute an increase to the length and thickness of the styloid process; which will then exert pressure on the adjacent structures such as the glossopharyngeal nerve, internal jugular vein, facial nerve, vagal nerve, carotid artery, and hypoglossal nerve, leading to different types of pressure symptoms.

Symptoms of Eagle syndrome may include:

Eagle syndrome is also divided into two and these are:

There is no known cause for Eagle syndrome. Tonsillectomy which is the removal of the tonsils is considered responsible for ES problem. However, the condition is also seen in individuals who have never had their tonsils surgically removed. Because of this, various factors have been considered such as:

Eagle syndrome can be confirmed by a physician through physical examination and radiologic procedures. The occurrence of ES is suspected when an individual presents with the classic form of eagle syndrome symptoms. The diagnosis of the vascular form is harder and needs an expert for an opinion.


Radiologic exams that may be performed are:

Eagle Syndrome can be treated by nonsurgical and surgical procedures. If nonsurgical treatments fail, patients are typically referred to a surgeon. Vascular and classic form of ES is treated surgically.

Medical therapy – These can be antidepressants, analgesics, local infiltration with steroids, and anticonvulsants

Styloidectomy – It is a surgical procedure that involves the removal of the elongated region of the styloid process. The two surgical approaches to this method can either be extraoral approach or intraoral approach, but the latter is preferably used. 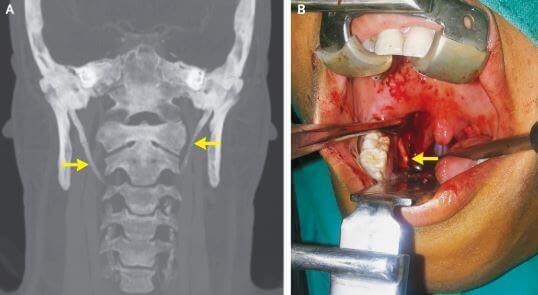